This past Saturday I had to put my dog, Chevy, to sleep.  It has been really lonely in our house without him.  It was a hard decision, but it was the best one we could make for him.  Just when I thought that I would never stop crying the first hosta catalog for 2009 arrived.  It's almost like Chevy sent it to cheer me up!  I've been drooling over the new hostas in the Naylor Creek catalog.  I know for sure I definately want to order Tickle Me Pink.
Posted by Hosta Nerd at 7:03 PM 1 comment:

Fall leaves are great for your flower beds.  We have a leaf blower/vacuum.  The vacuum sucks the leaves up and mulches them.  I use this mulch to cover my flower beds in the fall (after frost, before and you are inviting mice and voles).  Comes spring the leaf mulch breaks down into a good compost.  I recently read an article in one of the gardening magazines that said you should never rakes the leaves from your flower or vegetable gardens.
Posted by Hosta Nerd at 6:53 PM 1 comment: 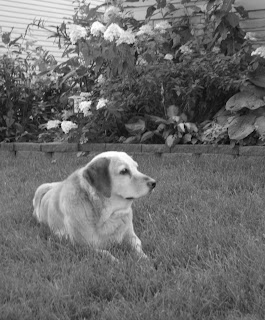 It's hard to believe that almost 16 years ago one winter I walked into an animal shelter and saw a sad, scared, droopy eared dog.  My childhood dog had just passed away, and my parents decided to adopt a new dog.   A breeder of coonhounds had recently had all of his dogs taken away by animal control, and here at the animal shelter were two one year old lab/redbone coonhound mix dogs.  One was black and the other reddish tan.  My parents wanted a girl, so they adopted the black dog and named her Reba.  When I first met my dog he was very scared of everyone, especially men.  He had the sad eyes of a hound, and when I looked into them I knew he was going to be coming home with me.  I adopted him and named him Chevy, and we have been living happily together ever since.  Chevy was always a mellow dog, never barked, and loved people.  When I first adopted him he often went with me to teach Kindergarten, and loved to share breakfast with the kids.  He was rudolph in the school holiday concert, and even dressed up as a dinosaur for Halloween.  I lived out in the country at the time, and he loved to chase the corn pickers down the road eating all the corn cobs that fell off the truck.
He is 16 now, and he doesn't run any more.  In fact, he kind of just meanders now.  His back legs are stiff when he gets up from his nap, and the fatty tumor that was once the size of a quarter on his side has now grown to the half the size of a basketball.  He has lost weight and his breath is really bad.  He still wags his tail when we come home, and he still loves to beg for food. But his time is coming to an end.  This weekend we had him up-north where he used to love to go for walks with my dad in the woods.  As we left, I realized this would be his last time he would ever be up-north and that made me really sad.  He would never take himself for walks when no one was paying attention to him, or eat another fish my dad had just taxidermied for someone while they were out to dinner.  I realized this weekend, that Chevy could possibly only be around for a few more days to a few more weeks.  I think the biggest dilemma is that I am given the right to choose if he should be put down or not.  Dogs can't tell you if they are in a lot of pain, and as much as we love them do we have the right to decide for them?   Chevy has given me lots of great memories, lots of love, and now I just want to make sure he is happy and healthy until his last day.
Posted by Hosta Nerd at 1:06 PM 1 comment: