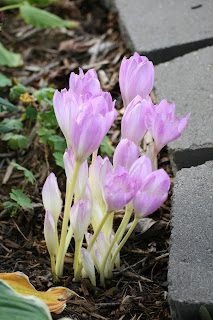 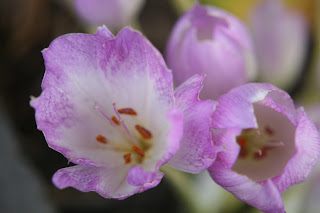 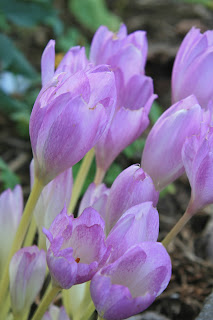 These Colchicum are gorgeous and always a welcome fall surprise.  The orchid like leaves come up in spring and die off in summer.  The large pink and white blooms come up in fall.  This year with our wacky weather the blooms have appeared at least three week early.
Posted by Hosta Nerd at 8:16 AM No comments:

Saturday afternoon I was sitting in the house when I heard a very loud bird in the backyard.  It sounded like a hawk, so I went to the window expecting to see a hawk chasing down one of our chipmunks.  Many of my neighbors were standing in their backyards looking to the sky, so the bird definitely had garnered much attention.  When it finally flew down to take a drink out of the bird bath I realized it was not a hawk but a blue jay.  I didn't realize it, but blue jays often mimic hawks.  My friend, Rob, told me they have even been known to mimic cell phones. 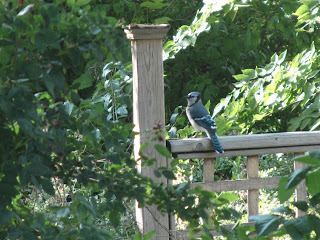 Posted by Hosta Nerd at 4:47 PM No comments: 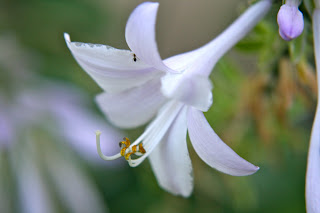 At the end of the summer, beginning of fall there are some hostas that are just beginning to bloom.  Many of the late summer blooms are dark purple in color or are fragrant.  Fragrant hosta blooms are usually larger in size.  Some are so strong that you just have to walk into the garden to enjoy their scent.  The scent is much like a lily of the valley.  Like lily, hosta flowers are more fragrant in the late afternoon/evening.  Some, like plantiginea, only bloom in the late afternoon/evening.  Hosta plantiginea has blooms that are up to 4 inches long, and is the mother of all fragrant hosta available on the market.  Here is a list of hosta with fragrant blooms: Fragrant Blooming Hosta List.

Tomorrow is the Art Harvest at the Green Bay Botanical Garden.  Admission into the gardens is free all day!  Two area clubs will be selling hosta and daylily and there will be tons of craft vendors.  Just the free admission alone is great!  The weather is supposed to be great - in the high 60's and sunny!
Posted by Hosta Nerd at 8:55 PM No comments:

This watermelon looked so cool when we cut it open this past weekend.  I love the funky pattern. However word of warning - this watermelon's taste does not match its looks.  Yes, it was so overripe it had turned fermented. 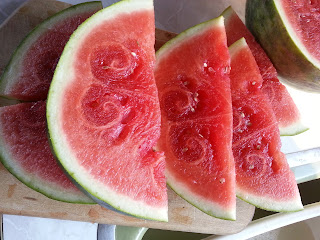 Email ThisBlogThis!Share to TwitterShare to FacebookShare to Pinterest
Labels: watermelon

Plants that rocked this summer's weather

As labor day is coming to a close I am looking back on summer.  The weather was so incredibly hot and the lack of rain was scary.  Then I saw that the topic on Gardenchat this week was "survival of the fittest" what plants survived this summer.  So I had to take a look out in the garden to see what plants rocked through this summer's weather.  Here are the plants that seemed to thrive: