Hosta of the Day - 'nigrescens'

It was love at first site for me when I spotted the hosta 'nigrescens'.  I love the upright, vase shaped leaves and the unusual grey green color.  The flowers scapes on 'nigrescens' can grow to be 6 to 8 feet tall.  The shape of the leaves always remind me of spade shovels.  It's easy to grow smaller hostas underneath this one, but be careful since mine seems to be a vigorous growing hosta.  Pair this one with green, gold, or variegated hostas.  The lower the hostas surrounding it will show off it's great upright shape.

Spring is a great time to divide hostas, especially those very large hostas.  It's easier to divide that giant hosta when it's eyes are just coming out of the ground then when it's a large leafed out plant.  If you can divide them before they leaf out, most of them won't even show signs that they have been divided.
Before I get into how to divide your hostas, I just want to say that despite what some of you have heard, hostas do not need to be divided.  I divide mine simply because they outgrow the space I have given them.  If I had a lot of space in my garden, I would never need to divide my hostas.  The only time a hosta may need to be divided is if it develops fairy ring.  Fairy ring is when the middle of the hosta dies out but the hosta surrounded the middle grows just fine.  Fairy ring isn't going to kill your hosta, but it just isn't visually appealing.  Usually fairy ring is the result of the middle of the hosta sinking into the soil.

Here are the steps:

Playing with New Camera - Any advice for SLR Novice? 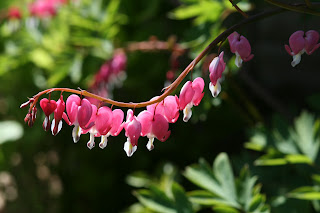 On Monday I bought a new to me camera.  I decided to try to delve into the world of SLR.  Since I have no clue about photography past my point and shoot camera I decided to buy used.  So I am now armed with a Canon Rebel XTi.  Everyone I know who owns an SLR camera does not use it for garden photography.  So if there is anyone out there in the gardening world that uses a SLR camera I welcome any advice.  I tend to do a lot of macro shots in the garden, and would really like to know how to get the best shots from my camera.

Hosta of the Day - 'Maui Buttercups'

Hosta 'Maui Buttercups' is one you have to see, and I promise you will love it.  It has great bright gold coloring, which helps brighten up any shade garden.  The leaves are round, and the more this hosta matures the more texture the leaves gain.  The leaves have a slightly cupped shape, and love to gather rain water in their leaves.  Pair this hosta with dark green, variegated, or blue hostas.

Hosta of the Day 'Marilyn Monroe'

If you are looking for a hosta that quite a few unique features, then look no further than Hosta 'Marilyn Monroe'.  Not only does this hosta have red petioles, but it also has white backs and leaves that are slightly glossy.  The leaves are light green and rounded with a very wavy edge.  A hosta that is similar in shape is hosta 'Grand Slam', but the leaves on 'Marilyn Monroe' are more consistently wavy.  Pair this hosta with blue, white or gold variegated, dark green, or gold hostas.

This week's shade plant is actually a relative of last week's dicentra (bleeding heart).  You will see the resemblance in the leaves of both plants.  Corydalis lutea is a very airy plant that forms small mounds with yellow tube shaped flowers.  A huge advantage of this plant is that it blooms from early spring all the way through late fall.  Corydalis lutea has a tendency to pop up (spreads by seed) in unexpected places in my garden, but it is no means invasive.  The stems of the plant are very brittle, which make it very easy to pull up from an unwanted spot. 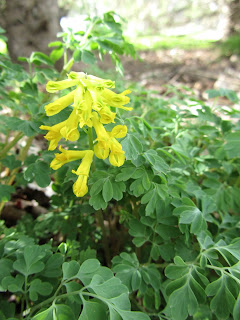 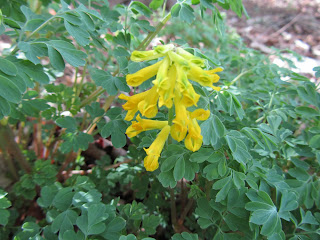 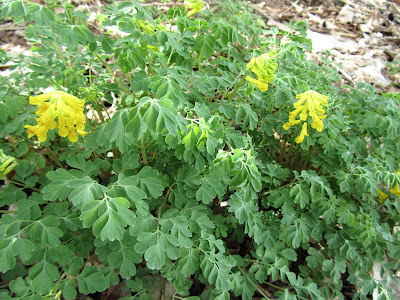 Hosta of the Day - 'Moonlight Sonata'

Hosta 'Moonlight Sonata' might not be eye catching at first, but it's one that I have will really grown to love.  It is a lovely blue-green color.  The leaves start off almost a matte in spring and grow shinier throughout the summer.  The leaves are thick and are held up high, this is not a lay on the ground hosta.  Then in late summer the plant produces a large, fragrant white flower.  You could easily grow smaller hostas under the base of this one.  Green, yellow, and white variegated hostas would be good pairs for this hosta.

Hosta of the Day - 'Metallica'

I've already admitted in an earlier post this winter that I have been known to buy a hosta just because of it's name.  When I found out there was a hosta called 'Metallica' I just had to have it.  It could have been the ugliest hosta on this earth, and I still would have "needed" it in my collection.  Lucky for me, it's not the the ugliest hosta.  By now you probably have guessed another secret about me - I am a metal head at heart.  'Metallica' has dark blue green metallic colored leaves that are slightly wavy.  You won't find it in the mosh pit (or me for that matter), but it does "mosh" well with gold colored hostas.

Hosta of the Day - 'Liberty'

Each year the American Hosta Growers Association members vote for a Hosta to represent an excellent hosta for all regions of the country that is reasonably priced and widely available.  The 2012 Hosta of the Year is Hosta 'Liberty'.  Liberty is a slow growing hosta, but patience with this one will really pay off.  It starts off in spring with an irregular gold margin, and as summer progresses it turns a creamy white.  It can be a real show stopper!  Pair this one with dark green or chartreuse colored hostas.

Hosta of the Day - 'Little Sunspot'

Hosta 'Little Sunspot' is a small hosta that packs a lot of punch.  The leaves have a dark green margin with a vivid gold center.  It has been a fast growing hosta in my garden, and it is great for brightening up a dark border.  It blooms in early spring, and has been known to bloom again in late fall.  Pair this hosta with green, blue, or white variegated hostas.

Shade Plant of the Week - Dicentra or Bleeding Heart

Hosta of the Day - 'Lemon Lime'

This cute little hosta is a very vigorous in my garden.  I swear every year I divide this one in half, and by fall it's back to it's spring size.  That's unusual for a miniature hosta, since they are usually not the most hardy of the hosta family.  Another unusual feature of this hosta, is that it tends to bloom more then once a year!  It has wavy, lance shaped chartreuse leaves that hold their color all season.  It's a great hosta for the front of the border, especially a shady border that you want to brighten up!  It would also work great in a container or miniature garden.

If you don't have room for the hosta 'Abiqua Drinking Gourd' which can get quite large, but love the large blue cupped leaves....then a slightly smaller look-a-like hosta would be 'Love Pat'.  It has blue chalky leaves that form upright cupped leaves.  The leaves are very thick and corrugated, which makes them more slug resistant.  Pair this hosta with gold or green hostas to bring out it's beautiful blue color.

This will be the last post on my travels to New Mexico.  I promise tomorrow to feature a hosta for you!  I just enjoyed my stay in New Mexico so much that I wanted to share it.  I don't think New Mexico is usually on the top of everyone's travel list.  There are natural hot springs that run throughout the town of Truth or Consequences.  Our house featured a hot spring tub, which was where we spent the majority of our vacation.

Everyone was so nice in Truth or Consequences.  Even though it was a small town and everyone knew everyone they never made visitors feel unwelcome.  It was not uncommon to walk into a store or restaurant and people would just start talking to you, asking about your day, like you were one of the local towns people.  Here are the last of some of the pictures of gardens and such of the house we rented while there, and of the nursery I visited there called Exotic Cactus Ranch:

I obviously have an obsession with foliage, how else could you explain my hosta obsession?  So when I saw this plant in a catalog many years ago I was automatically drawn to it's very large circular shaped leaves, almost like green umbrellas.  I didn't even care if it bloomed, I knew it would make a great addition to my shade garden.  The leaves can measure 24 inches across, and the plant itself can grow 3-4 feet tall.  In mid summer, it also has white plume like flowers (much like and Astilbe).  If you decide to add this plant to your garden, make sure to give it lots of room! 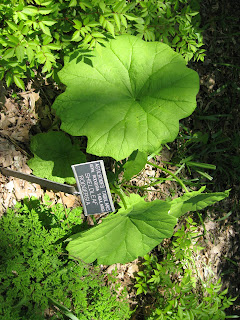