I know it's been almost a week since I posted, but I spend most of my time watering and trying to keep cool.  Well, today I was out watering when I noticed that wasps were swarming my Baptisia plant.  It has long ago stopped blooming and now has only seed pods on it.  So I couldn't figure out why they would be interested in a plant with no flowers.  When I took a closer look I realized the plant was infested with some kind of tent caterpillar (or some kind of caterpillar that makes webs).  So I grabbed my camera and watched, as I still wasn't 100% sure why the wasps were so interested.  As I watched patiently and hoped not to get stung (I'm allergic to wasp stings) I realized the the wasps were trying to eat the caterpillars.  I watched one sting a caterpillar, and then once it stopped moving all of the wasps came in and started to feast on the dead or paralyzed caterpillar.  It was cool and gross all at the same time.  I tried to get pictures of it, but they are not the best since I was desperately trying not to get stung.  But here was another strange thing I observed (see bottom pic) the wasps were also digging in to the seed pods on my Baptisia, like the were putting holes in them for some reason.  Any thoughts on this?  For those extra curious people like me, I went out and captured a short video.  The wasp flies off with the caterpillar, only to snack on him while sitting on one of my hostas. 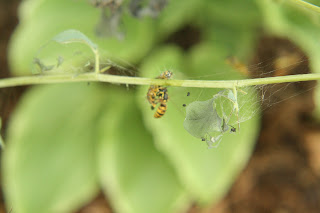 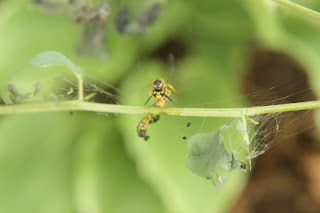 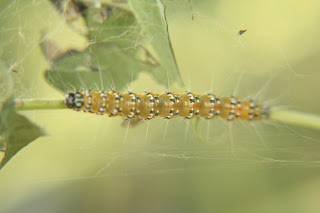 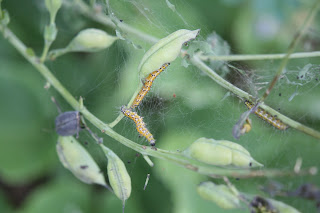 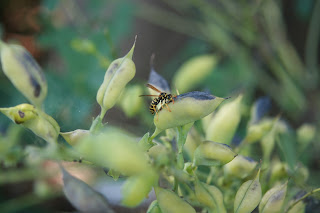 I'm no entomologist, but you could G@@gle Hyphantria cunea and see if it looks like a match. It looks like it could be the larval stage of the fall webworm moth.

The wasps might be eating the caterpillar, but they also could be laying eggs within the caterpillar. (The eating part comes later, when the eggs hatch and the wasp young eat their way out of the inside of the caterpillars...hope you're not eating a Cheeto right now.)

It's wise to be careful, but what looks like a big stinger is more likely an ovipositor, used to insert eggs. There can be some venom, but that isn't the primary purpose.

This is only a guess, but I wonder if that is what they are doing with your seedpods, too?

If anyone reading this has corrections or additions, please chime in. I'm a rank amateur.

That could possibly be what's on that plant, which would make sense since it's right under a maple tree.

I had wondered about the egg laying too. Thought perhaps that was what they were doing in seed pods. They were eating the caterpillars, at least the ones I saw. They were taking big chunks out of them, and then nothing would be left but the head when they were done. I just couldn't stop watching.

It's a tough world out there.

I thought wasps were useless, but I guess they actually get rid of a lot of insects in the garden.

Hello there!!! Very cool post today. Love the topic. These wasps are beneficial as most of them are. I imagine that they were laying eggs within the caterpillar body. Yeah it's nasty....but they are great bugs to have around as they eat all the bad ones:) Love your videos that go along with the narrative.