How hostas really are the friendship plant 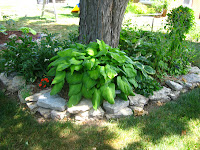 Little did I know when I joined the gardening forum site Gardenweb in 2003 that I would actually get to meet some of the gardeners I corresponded with on the site. When I first joined I was so excited to learn that I could trade plants with other people on the forum. I was also a little naive in believing that all people are honest. I did a few trades that went exceptionally well. Well then I made a trade agreement with a person named "Kristin". We agreed to send a big box with about 15-20 plants. So I mailed out my huge box of plants (which cost $12 just to mail), and never received one back. I got responses from her, saying she mailed hers out weeks ago and she never received my box either. Yes, I admit I forgot to put tracking on the box. Then she said maybe we should each just resend our boxes. It was at this point that somehow I was contacted by other members of Gardenweb named Andrea and Susan. They had tried to trade with "Kristin" and were having the same issues that I was with her. We were forwarding emails "Kristin" had sent to us, and she had different stories for each of us. "Kristin" even went as far as saying in one email that she was not "Kristin" but really her cousin because "Kristin" had been in a horrible car accident and was in critical condition, but emailed me as "Kristin" and everything was fine. This is one of the reasons why Gardenweb came up with the Rate and Review Exchange forum later on.
So why tell you all of this? Well, it turns out that Andrea (and Susan) and I all became very good email friends because of this incident. Andrea and I shared a hosta obsession, and so we often exchanged hostas (Guacamole being one of the first she sent me). Then in 2007 the AHS held their annual hosta convention in Indianapolis where Andrea lives. She invited my friend, Gina, and I to stay with her during the convention, and we took her up on her graciousness. Andrea is so full of life, humor, and generousity. We were blown away by her hospitality, and even more blown away when we saw her working first hand. Andrea runs a outreach program for homeless in downtown Indianapolis called PourHouse. We would be driving down roads in downtown Indy, and Andrea would see a homeless man on the side of the road. She would stop, and always know their name and their story. She would ask them if they needed something like food, clothing, or water which she always carried in the back of her vehicle. You could tell that they were always so happy to see her, and she had a real connection with them. Watch this video. She was like angel. While in Indy, Andrea even drove us to the spot where she was planning on opening a new kind of homeless shelter. It wasn't a homeless shelter really, instead it was a place where homeless could stay in exchange for them learning new job skills. Her plan was even to have a greenhouse where they could grow and sell plants. We have stayed friend with Andrea since then, and right now her outreach program is in great need of help. She has more homeless then she ever had due to the economy. She has many trials and tribulations over the years since we last visited her in Indy. For one, her "homeless shelter" (for lack of better word) never saw the light of day. People who worked in the area neighborhood made sure of that, and then there is lack of funds to do what needs to be done that non-profit organizations often run into. So I hope as you read this you will consider donating to her cause. It might be clothes, food, water, bus passes, money, or if you are in the Indy area maybe some of your time. It will go towards a great organization, and to people who really need it.
The picture is of my hosta 'Guacamole' that Andrea sent me one summer day, and every time I look at it I think about how blessed to have such a great person like Andrea in my life. So remember that even when bad things happen, there is usually something good waiting to happen just around the corner.
Posted by Hosta Nerd at 9:07 AM

Incredible story! Andrea is a special soul and what a blessing for the two of you to have met.

Yes, there are creeps everywhere and one has to be careful on the internet. Many of my friends ask how I can be friends with people over the internet and even meet them. They think it is scary and everyone is a pedophile or mass murderer. I tell them you CAN find wonderful friends, it is just another way of meeting them. Use common sense, I say.

I have some wonderful friends I have met online and look forward to meeting them in person!

I agree completely about meeting people from the internet. You have to use common sense. Most people out there have good intentions, but every once and a while you may find a creep.

PS My husband and I actually met online.