It's been a crazy week here in my little nook in Wisconsin, and not just because I had two visits from my friendly garden stalker.  They say if you don't like the weather in Wisconsin just wait five minutes and it will change.  Well, it might not have been 5 minutes, but we certainly had some weather changes.  Tuesday it was in the 70's here, after work I managed to fit in my walk and thin out some more of my plants.  Later that night as my husband and I were eating dinner the tornado sirens started to go off.  We live right on the border of two different counties, so sometimes when I hear them go off it's not even for our area.  It was perfectly sunny in the front yard, but in the backyard you could see some storm clouds headed our way.  So I turned on the TV to see why the sirens were going off, as sometimes they will turn them on just for severe thunderstorms.  There was nothing on the TV, no scrolling or little map in the corner the screen.  About 5-10 minutes later the weather man finally broke into American Idol, and said that a funnel cloud had been spotted and was headed right towards the border of the two counties I happen to border.  So, of course, the first thing my husband does is run outside and look.  He comes running in and tells me that there is tons of lightning and it all seems to be in one spot, like when you see tornado coverage on TV.  So needless to say we called to our cats and headed to the basement.  All was good though, there had been two tornadoes that touched down west of us but no one had been hurt.  Friday we were in the 40's all day with rain.  Later on that night the rain turned to sleet, and then to snow.  Luckily, the ground was warm enough that their was no accumulation.  As I was watching the snow come down Friday night, I heard a noise like cars doors slamming.  My first thought was that the hosta stalker was stopping by at 11:30pm this time, since she saw the lights were on.  Then I saw the lights, and realized fire trucks had just pulled up to my backyard neighbor's house.  They mounted big spotlights on their house, it was then that we saw the smoke coming out of their garage.  We also heard the sounds of chainsaws, which couldn't be good.  Fortunately, the fire appears to have stayed contained to their garage and no one was hurt.  Yesterday we had a cookout at my house for my mom, but since it was only in the 40's we couldn't sit outside and enjoy the weather or all the plants coming up in my yard.  As I write this post, it's in the 30's and there is frost on all of my neighbor's lawns, thank you Maples for protecting my yard from frost!  So as you can see, it's been a crazy week here, but things can only get better, right?  I did just see a bunny hop up to one of my hostas, smell it, and hop away...Yeah!  Happy Mother's Day to all mothers out there, but especially, my mom, whom I think is the best mom in all the world! 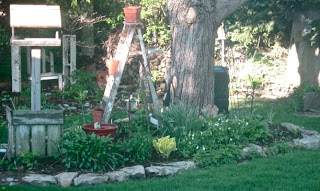 Hosta 'St Elmo's Fire' emerging.
Taken from my window, since it was too cold for me to venture outside LOL
Posted by Hosta Nerd at 7:52 AM

Wow, you had the whole gamut of weather and excitement! Things have got to look up from there! Maybe that was the last little blast that winter had, hope you settle into spring now! Chilly here too, but in the 50's today.

I hope that is the last winter blast we see until November!