Sometimes Neighbors are a Real Ditch

Before I start this blog, I want to preface it with the fact that almost all of my neighbors are wonderful.  We look out for each other, share a cup of sugar every once and a while, and enjoy each other's company. I live on a very quiet street surrounded by mature trees, hence the hostas.

Our three neighbors to the south of us have a drain pipe running through their ditch, which they then covered so it's easy to mow.  How long ago this did this, I have no clue.  So between this and the culvert that sits underneath our driveway, that has raised from all the years of frost, the water sits in our ditch.  My neighbors have called the town, but they refused to even come out and look at the culvert.  So my husband found the same drain pipe the three neighbors have and connected it to theirs.  We then ordered yards of dirt with our neighbors to the north who also decided to do the same as us.  About a week after we finished the project we received a letter from the town that we had 30 days to remove everything we just did.  The letter pretty much said that the ditch belonged to the town and not to us....I'll remember to have them mow it from now on.  So my husband called and talked to them, turns out one of neighbors turned us into the town.  When he asked why the other neighbors were allowed to do it, and we were not allowed to do this...they said it was because the other neighbors had not been caught.  Turns out it was a person who turned us in doesn't even live on our street, but happens to have a relative who works for the town.  Funny how when they tell their relative, the town will come out and look at the ditch, but not when others call about a real problem.  The person who turned us in has a little war going on with the 80+ year old lady who lives across the street from them.  They are constantly harassing her, even yelling obscenities at her on the day of her husband's funeral last year.  During the summer, I meet with the older ladies (yes, they are all in their 80's except me) in my neighborhood on Wednesday afternoons for dessert.  So my only guess as to why they turned us in, is because I have befriended this neighbor. 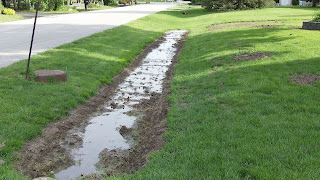 The standing water in our ditch 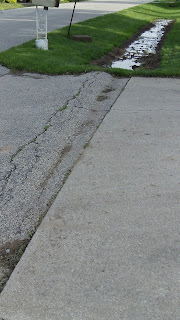 The culvert the town says there is no problem with 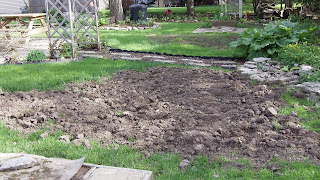 The extra dirt from the ditch, my husband has decided to dump in our backyard.  Guess I won't be having any garden walks this year, since my husband and growing grass do not mix!
Posted by Hosta Nerd at 9:20 PM

We need to TP their house..or just egg em!

Somebody's always gotta be around to spoil the fun. That pile of dirt in your backyard looks like a good place for a new flower bed....just sayin'.

I wish I could make it a garden in that spot, but I doubt husband will agree LOL